By Kauser KanjiPublished On: April 1st, 2020

#1. Can All the Broadcasters Survive?

Until relatively recently the tree of TV evolution had three main broadcaster branches: public service broadcasters – which were reliant on licence fees, commercial broadcasters – which gathered the bulk of their revenue from linear advertising, and hybrid organisations – which were funded by both. These branches then grew their own offshoots so that, for example, BBC Worldwide (formerly BBC Enterprises, now BBC Studios) was formed to sell BBC content abroad and to exploit other commercial opportunities.

In the OTT era, the branches have subdivided again so that a commercial broadcaster like ITV now has an AVOD business (ITV Hub), SVOD products (Hub+, BritBox UK & USA and Cirkus) and even a nascent addressable advertising network (Planet V) which can help provide sustenance to not just themselves but to other companies. Many broadcasters also derive varying portions of their income directly from content production.

The stark question now, in this pandemic-hit environment, is can all broadcasters (globally) survive? The likely answer is probably not and counterintuitively, it’s the biggest ones that are most under existential threat. I’ll be posting a detailed analysis later this week but at the very least, we can expect some of the broadcaster buds to shrink back, go dormant or entirely wither.

Over a third of the world’s population is now in some form of lockdown and initially, broadcasters and OTT service-providers were reporting that TV viewing had massively risen as a result.

ITV, for example, said that ITV Hub had seen a +39% increase in consumption hours and a +32% increase in requests in March compared to the same period in 2019. Channel 4 told me that its VOD service, All 4, “achieved its biggest day ever on Saturday 28th March (based on the number of streams initiated)”.

And in an early study on the effects of social distancing and self-isolation, Whip Media Group surveyed 847 UK users of its TV Time app and reported that 90% of them planned to increase their TV consumption while they were housebound. WMG commented that:

“When asked what types of shows respondents were planning to watch during this time period, the most popular choices were Dramas (80%) and Comedies (79%), followed by SciFi/ Fantasy at 69%. It appears that viewers are looking for some combination of lighter entertainment and escapism from today’s ominous headlines. A notable group of viewers (22%) also said they are interested in Reality TV viewing.” 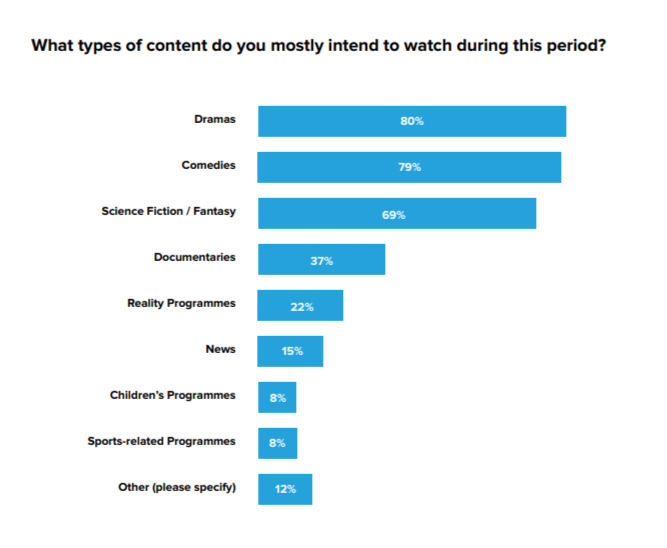 Encouraging news, to be sure, but it’ll be interesting to see if video retains its dominance as the quarantine continues. Will TV fatigue eventually set in and see people turn to social media, music, gaming, editorial, AR / VR and more experiential activities like cooking or gardening? On that score…

#3. Will Audiences run out of New Content to Watch?

The usual linear TV schedule has been decimated by the coronavirus outbreak. Live sport is in hibernation. Reality TV too. Indeed, any TV which is usually watched by a large, on-site, audience (or manned by even a medium-sized production crew) has been postponed, mothballed or cancelled because of social distancing rules.

What about scripted TV? Last week, Netflix’s Chief Content Officer, Ted Sarandos said that production on every single Netflix show, anywhere in the world, had come to a halt.

Echoing this, John McVay, the chief exec of PACT (a trade body which represents the commercial interests of UK independent television, film, digital, children’s and animation media companies) told the BBC’s Media Show that content production was “… in the deep freeze. Production has effectively stopped everywhere.”

I asked the big UK broadcasters directly if they could tell me how much scripted new content – whether from new or existing shows – they’d already taken delivery of which could be aired over say, the next six months. Understandably, none of them could provide an immediate answer; it’s a complex question.

Will audiences, then, run out of new content to watch? In short: no. TV is an inherently creative medium and a medium for creatives. Within days of the UK lockdown coming into force, Channel 4 announced a roster of new programming “to help the nation navigate through the coronavirus crisis, support them through isolation and keep them entertained”. The BBC, similarly, laid out its plans to “bring the nation together and provide great British entertainment during these difficult times.”

And last week, Disney+ launched in the UK, Ireland, Germany, Italy, Spain, Austria, and Switzerland (the service will go live in France on April 7th).

Netflix’s Sarandos too told CNN that,

“We don’t see any disruption in our output over the next few months… Maybe later in the year, if this progresses for longer, you’ll start feeling some of that as the physical production is not operating.”

That’s the unknown variable: the length of any continuing confinement. For now, the visual entertainment companies have got viewers covered.

There’s a difference, of course, between new content and new premium content. Here’s an interesting piece from the Times (paywall, published Friday 10th April) about the longer term outlook for the making and airing of primetime dramas. Channel 4, the BBC, ITV and Sky are all quoted. The basic gist is that subject to the duration of social distancing rules, the big broadcasters may need to ration their premium content over the next six to eighteen months.

#4. What Happens to all the Freelancers?

Whilst some content is still being made, these are extremely difficult times for most freelancers. As early as the 19th of March, the Guardian was reporting that 120,000 film industry workers had already lost their jobs as a result of the coronavirus shutdown. In the UK, BECTU (the Broadcasting, Entertainment, Communications and Theatre Union) estimated that 50,000 people no longer had regular work.

Urging the state to help, John McVay of PACT said that previously,

“… the creative industries are one of the UK’s success stories. We’ve been growing at twice the rate of the economy. There’s 70,000 SMEs and we rely on tens of thousands of self-employed freelancers most of whom aren’t now working. And we’re calling now on the government to do something urgently to help those highly skilled craft and creative people to make sure that when we do get to the other end of this we can still call on their skills and talents to make the great shows, the great entertainment and the great experiences that we’ve all taken for granted for a long time.”

In a letter to the Chancellor, the broadcasters too asked for the government’s assistance.

In response, Rishi Sunak announced that millions of self-employed individuals will receive direct cash grants of up to £2,500 a month for three months based on trading profits over the past three years.

Will this be enough? Payments won’t start until the beginning of June and even although the government will allow for VAT to be deferred in the interim, many freelancers won’t know if they’ve qualified until they get a confirmatory letter.

The outlook is just as tough for content producers themselves. As McVay put it,

“… when the market comes back and people are saying we have a great new idea or a new script or a format idea and we’d like you to invest in it, people won’t have much money – they’ve burnt through it just keeping alive. Then we will hit the buffers when it comes to research and development. I’m talking to the government and public service broadcasters to help people come up with great new ideas.”

#5. The Cascading Effects of the Pandemic

ITV’s trading update of the 23rd of March outlines the challenges that the company – and by extension, many other broadcasters – faces during this global crisis. Four passages from the statement are particularly instructive:

Like any other business ecosystem, when broadcasters are forced to tighten their belts, a range of suppliers feel the knock-on effects: content producers, technology companies, SaaS providers, recruitment consultants and individual contractors among them. In turn, these groups find it more difficult to retain their own staff. I’ve already heard from a number of industry vendors whose reactions have ranged from relatively sanguine (heavy emphasis on word relatively, depending on how long this all lasts) to outright panic from one CEO who told me that he’d struggle to pay his workers beyond April.

Things are undoubtedly hard and are likely to stay this way for some time yet. Let’s hope we can all keep working – and looking out for our friends and colleagues – for as long as possible. That applies to me and VOD Professional too – we’re ready to work on any projects as and when you need us.

In the meantime, if you feel like you want to share your stories, blow off some steam or just chat about the future of TV with a friendly geek, drop me a line or DM me via LinkedIn.